To share your memory on the wall of Robert Slagle, sign in using one of the following options:

He is survived by his wife, Tillie Slagle, son and son-in-law, Patrick Slagle and Jody Simon, sister and brother-in-law, Paula and Danny Gauthreaux, brother-in-law Butch Mory, as well as many nieces, nephews, grand-nieces, and grand-nephews.

Robert was known for having a great sense of humor. He loved practical jokes, and making people laugh. He never turned away someone in need, and always lent a hand when asked. He loved to build things and was a skilled woodworker. He enjoyed mechanic work as well and did most of his own repairs and maintenance on his vehicles. He was also a great cook and worked in a restaurant for several years. He truly embodied the phrase “Jack of all trades.”
Read Less

To send flowers to the family or plant a tree in memory of Robert Dean Slagle, please visit our Heartfelt Sympathies Store.

We encourage you to share your most beloved memories of Robert here, so that the family and other loved ones can always see it. You can upload cherished photographs, or share your favorite stories, and can even comment on those shared by others.

Posted Jun 21, 2021 at 11:57pm
Tillie, Patrick, and Paula and to all those who called Robert family, I am sorry for your loss. I think the last time I talked to Robert was at Mom's 80th birthday, way too long ago. But I remember Robert always having a smile on his face and a jovial attitude. You can also add bartender to his resume, which he did for my wedding many years ago. He even came dressed for the part! RIP Robert!
Blessed are those who mourn, for they will be comforted. I am praying for your comfort. Your cousin Nancy
Comment Share
Share via:
GW

Posted Jun 17, 2021 at 05:39pm
Robert you will forever be in our hearts. Thanks for making our journey full of laughter and love. We will meet again.

Posted Jun 17, 2021 at 03:18pm
Dearest Tillie and family, my thoughts, prayers and love are with you today. Robert was one of kind and will be remembered always in my heart.

Kathy Rodgers purchased the Blooming Garden Basket and planted a memorial tree for the family of Robert Slagle. Send Flowers 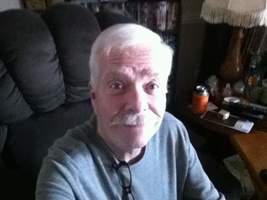