To share your memory on the wall of Robert Large, sign in using one of the following options:

Print
Robert “Bobby” Large, age 64 of Mertzon, Texas passed away on Thursday, May 13, 2021 at Shannon Medical Center following a courageous battle with cancer.

Bobby was born December 9, 1956 to Robert “Bob” and Nancy “Polly” Large in Robert Lee, Texas. He graduated from high school at Robert Lee in the class of 1975. Bobby served in the Navy and worked in various jobs including Jay Miller Construction where he made many lifelong friends. Bobby became a salesman for Concho Valley Business Solutions in 1996 and worked for this company until his retirement in August 2020.

As a salesman, Bobby traveled throughout the small communities in West Texas where his clients became his friends and then became his second family. His ready smile and upbeat attitude, along with his strong Christian faith became his trademark for living. His love for his country was evident in his daily conversations with all.

A memorial service will be held on Saturday, May 22, 2021 at 10:30 am at Noel & Company located at 11200 W. State Hwy 158, Robert Lee, Texas. (8 miles west of Robert Lee) and will be officiated by the Reverend William Hood. Arrangements made by Shaffer Funeral Home.

In lieu of flowers the family requests you make a memorial donation in Bobby’s name to the charity of your choice.

To send flowers to the family or plant a tree in memory of Robert J. Large Jr., please visit our Heartfelt Sympathies Store.

We encourage you to share your most beloved memories of Robert here, so that the family and other loved ones can always see it. You can upload cherished photographs, or share your favorite stories, and can even comment on those shared by others.

Posted May 20, 2021 at 11:56pm
I just want to say how much I’m going to miss Bobby. He was a live wire and so much fun. He touched so many lives and will be missed greatly. I am so sorry for the sadness of his mom and his sister and those that loved him so much. Diane Womack, OzonaTexas
Comment Share
Share via:
I

Posted May 20, 2021 at 02:20pm
I always enjoyed Bobby's visits to our office at the courthouse in McCulloch county. He was always full of joy and smiling. He was so positive about life even after his cancer diagnosis. He was pretty special to a lot of folks and he will be missed. Prayers for his family.
Comment Share
Share via:
MK

Posted May 20, 2021 at 09:17am
Had good memories of this man back in ozona, fun to be around and lots of laughs. May he rest in peace.
Comment Share
Share via:
BK 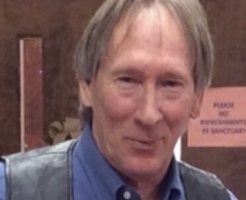